We Rub You: Sauce Me Up 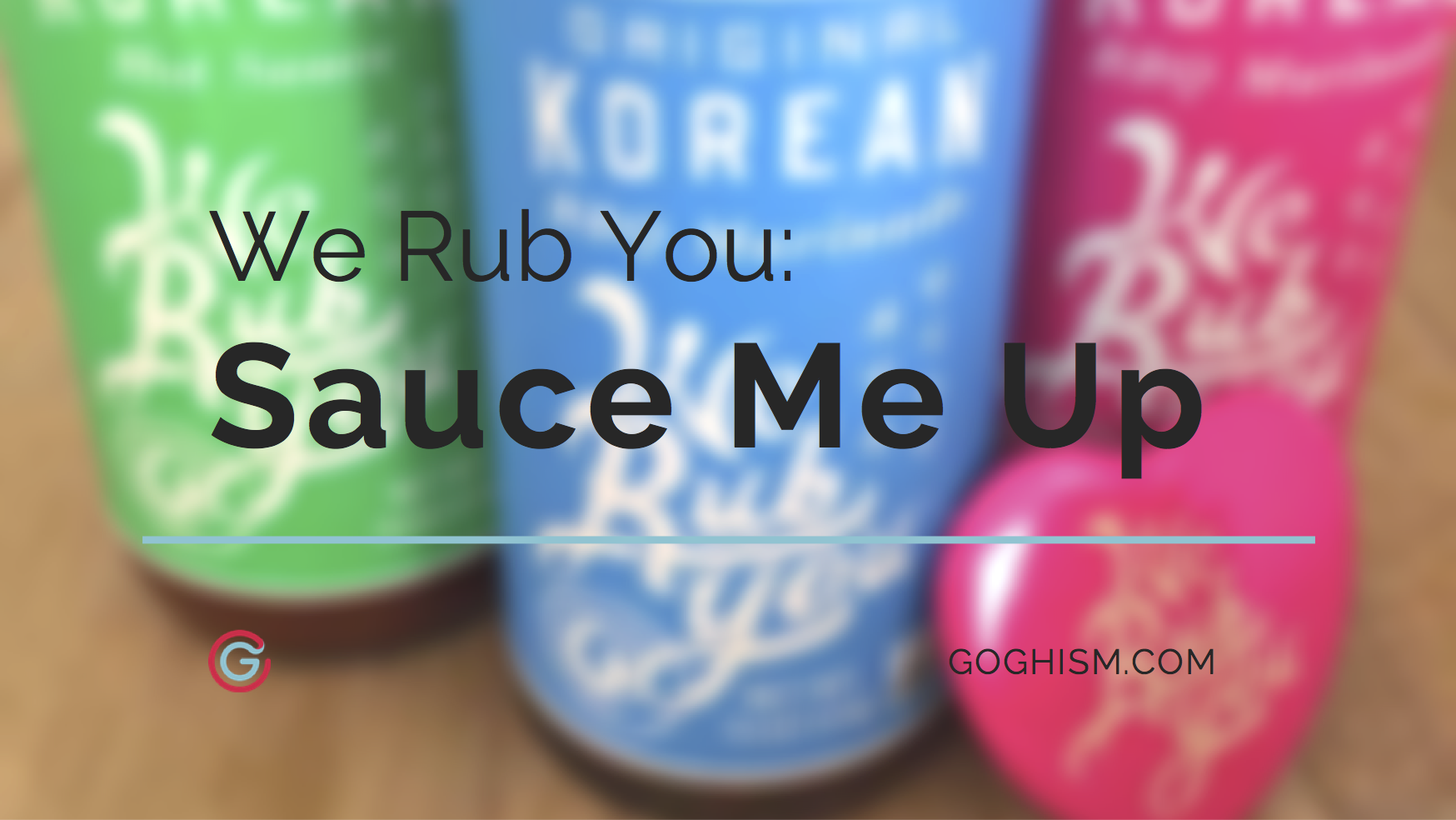 After a fun filled couple of weeks we’re excited to present the results of our play, big shout out to We Rub You for sending us their stable of sauces and huge thank you to us for cooking and eating it ;). All of this to conclude quite anticlimactically that We Rub You is no one trick pony.

This is somewhat of a departure of a post for us at Goghism, this isn’t so much a profile or review as it is a look into how we play during the week and a chance to explore We Rub You’s product offerings. It’s no secret how much we love what We Rub You stands for and after they so graciously sent us what else they have to offer we couldn’t help but try them out and write about it.

The Stand By, Old Faithful, Mr. Reliable, whatever you want to call it (I choose The Godfather) as We Rub You’s firstborn the Original definitely takes care of the family. We’ve covered this one in length, both for bulgogi and kalbi so we won’t spend too much time here. 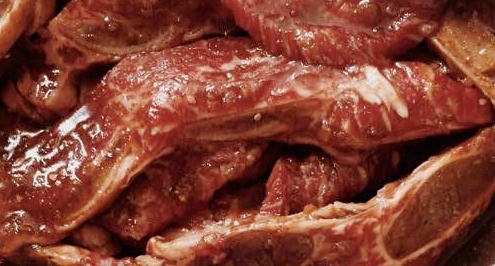 Of course we’re going to do kalbi though. Generally, I tend to ignore directions but definitely follow the bottle here. Just enough marinade to coat, don’t go dumping the whole bottle so the meat’s swimming like I did. It ended up coming out really salty (I also put all the marinade in the pan and reduced it which didn’t help things out either). The second time I listened like the good son I am and it turned out great. I made it for my Halmunee (Grandma) and she could not believe that I had made it (she thinks I’m helpless in the kitchen without her). 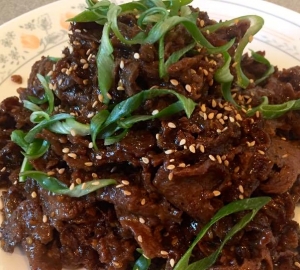 If I had to choose, I would go with bulgogi for We Rub You’s marinade over kalbi. Nothing wrong with the kalbi at all, but this is where all of the elements and components of the sauce come together and truly shine. Maybe it’s the increased surface area of the cut, maybe it’s the somewhat leaner fat level compared to the spare ribs, but when I take a bite of this I’m instantly transported to my childhood.

Full disclosure, I’ve never been the biggest fan of pork bulgogi. I like it just fine, but I always gravitate towards my default beef bulgogi. Nevertheless, we couldn’t try out We Rub You’s Spicy Korean BBQ marinade and NOT do a dwaejji bulgogi. I’m not sure why Korean cuisine associates savory and garlicky with beef and spicy with pork (for the most part), but boy does it work. 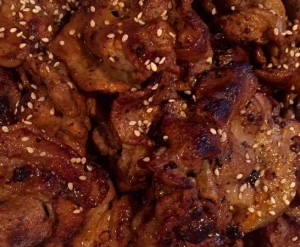 Most people might lean towards pork belly for this dish, but I opted for the slightly meatier and less fatty pork neck (it still has plenty of fat so don’t worry). The char didn’t come out all that great here, that was my fault, should have gone with my trusty cast iron. Flavor wise I would put it on par with really good Korean BBQ places and much higher than what I could bring together at home. In my opinion, the most crucial aspect of good pork bulgogi is getting the spice level right; it can’t be so high that it overpowers everything else, but at the same time there needs to be enough of it to make the pork ‘pop’. A really fatty piece of meat like belly or neck can get kind of cloy and boring on your palette after a while, it’s important to have a strong punch that keeps you coming back for more, and We Rub You’s packs that punch.

My family was getting pretty tired of my cooking at this point so Mike was generous enough to step in and play around with We Rub You’s sauce, he has a much higher tolerance for spicy food than I do (ask him about his favorite ramen) and when it comes to heat I trust his opinion way more than I trust my own. He chose to go with some chicken breasts which he marinated for six hours in the fridge before blasting them on his cast iron (at about a medium high). 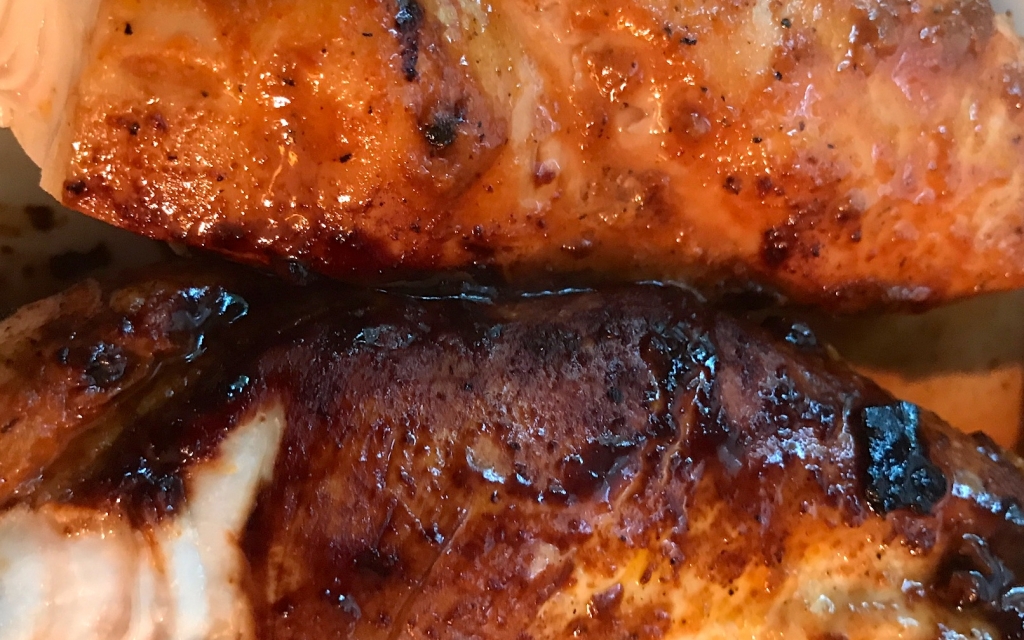 Visually the final result definitely speaks for itself, nice caramelization on the skin, doesn’t look dried out, can’t say I could’ve done any better. Taste wise it came out what to me is a spice head’s dream: authentic taste that brings the heat only as a flavor enhancer, not a flavor dominator. The heat actually comes out somewhat mild in a way that does not overpower the more subtle and nuanced elements of the sauce. The texture and consistency comes out great as well, without the sticky cornstarch viscosity that just screams out lower quality ingredients. 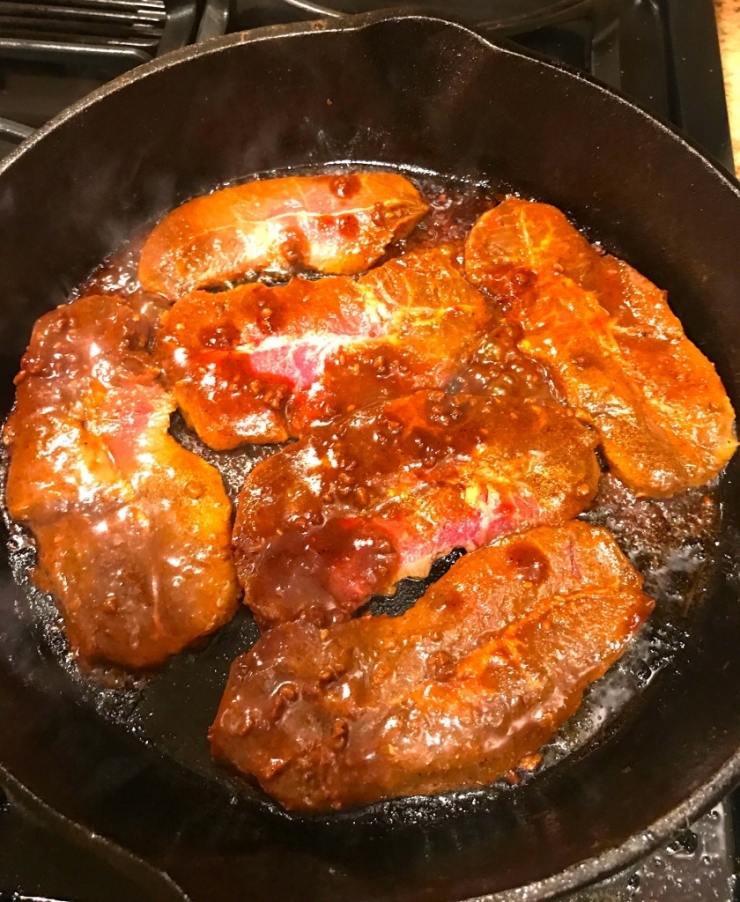 He didn’t stop there. Above is a top blade steak marinaded for only an hour before meeting the same fate as the chicken (although only a couple minutes per side). The flavor is much more easily distributed around the thinner more uniformly shaped cuts of meat (when compared to the oblong chicken breast) which helps highlight the great sweet and salty balance that exists underneath the heat. And my favorite part about Korean spicy food is that the spice doesn’t beat you up and destroy your tongue while eating it, the heat grows gradually throughout the meal as you keep eating. That to me is the warming, comforting, wrap yourself in a blanket around the fire heat that I’m looking for. 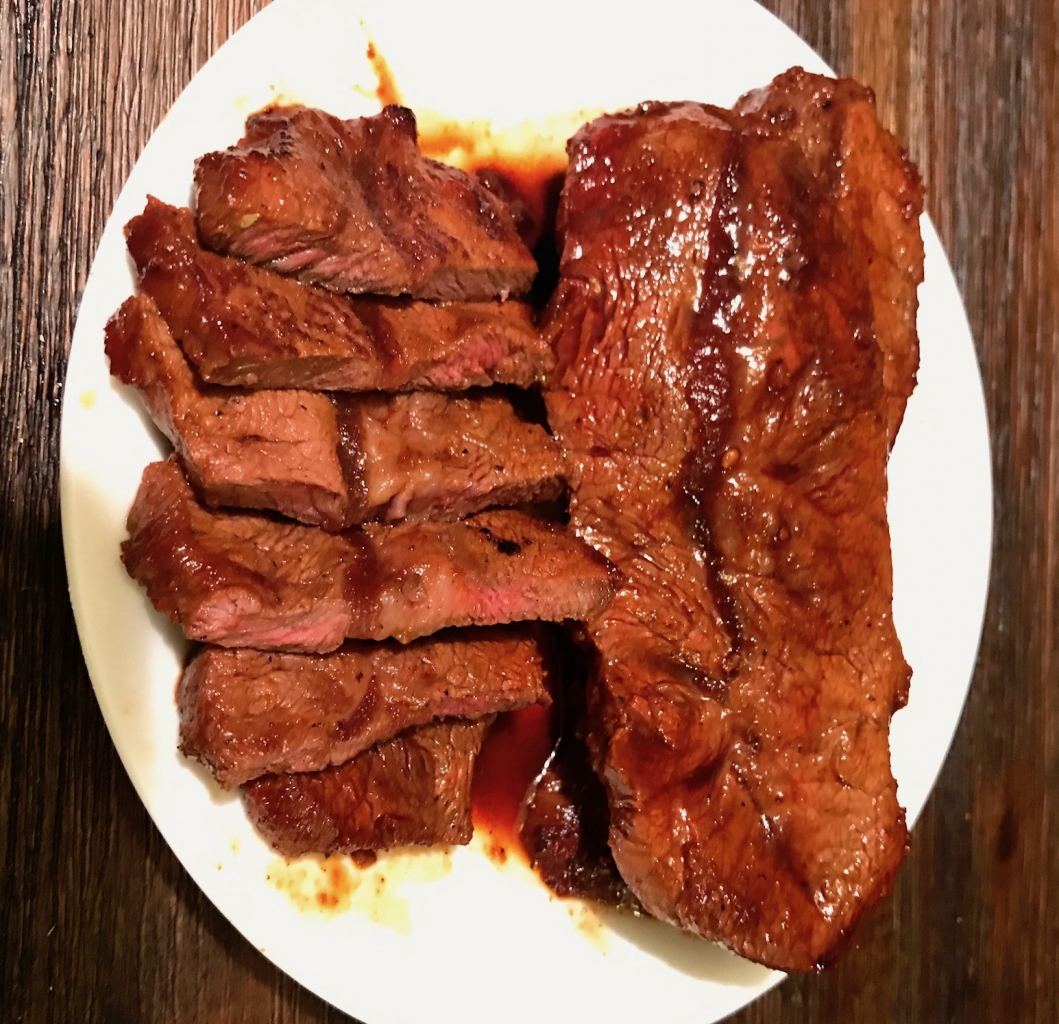 I started off by making what has to be the most ubiquitous dish to slather a bunch of gochujang onto — bibimbap (not pictured). To be honest, it kind of got all lost in the mix (pun intended); I couldn’t be sure whether the gochujang was really good or it was all of the other ingredients I threw into the bowl. So, I went in search of a purer more innocent vehicle of flavor, one that embodies sophistication, austerity, and…. naw I just got a bunch of wings and threw them in the fryer. 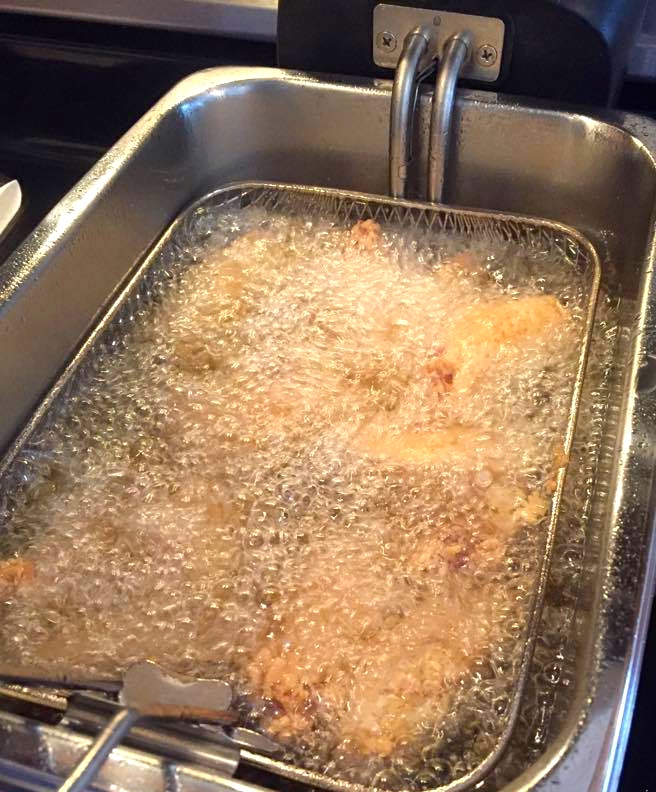 First batch I tossed them in straight gochujang, nothing else: 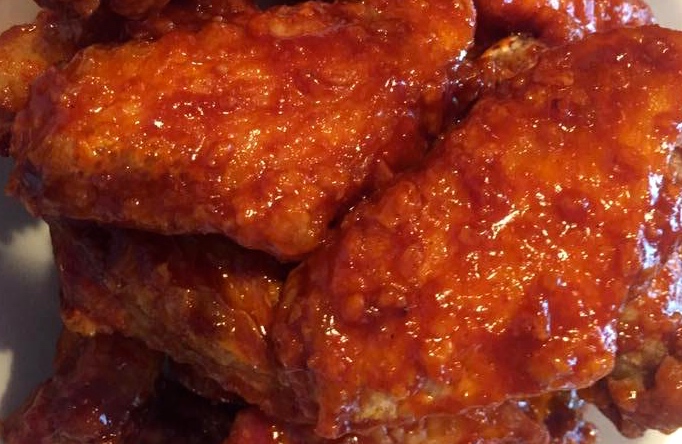 The first thing that came to my mind was “fresh”. I’m not too familiar with the gochujang making process, or even what the chilies look like before they’re turned into a paste. However, my Uncle grows his own chilies and takes them down to an old Korean grocery store and when I put these babies in front of him he just said “this smells exactly like the peppers as they come out of the mill”. It’s a little odd to think of something fermented as smelling fresh, but somehow We Rub You managed to capture the essence of fresh chilies while imbuing a deep earthiness and sweetness. For all of its positives though, I needed a control group to compare it to. Enter, Frank’s Red Hot: 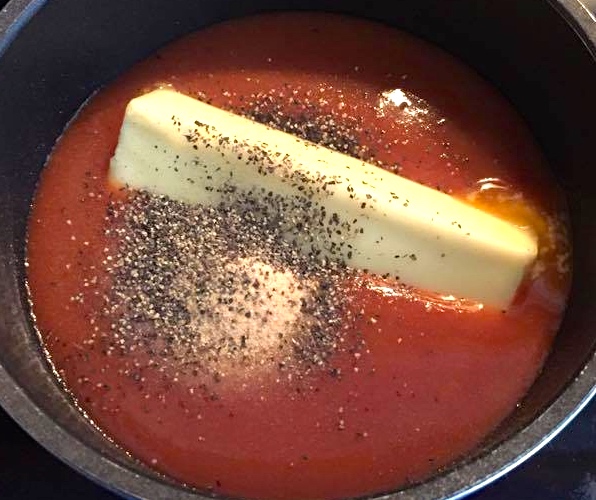 Actually, Frank’s Red Hot Buffalo Sauce to be specific. I added a few things from my pantry but it’s essentially hot sauce and butter. 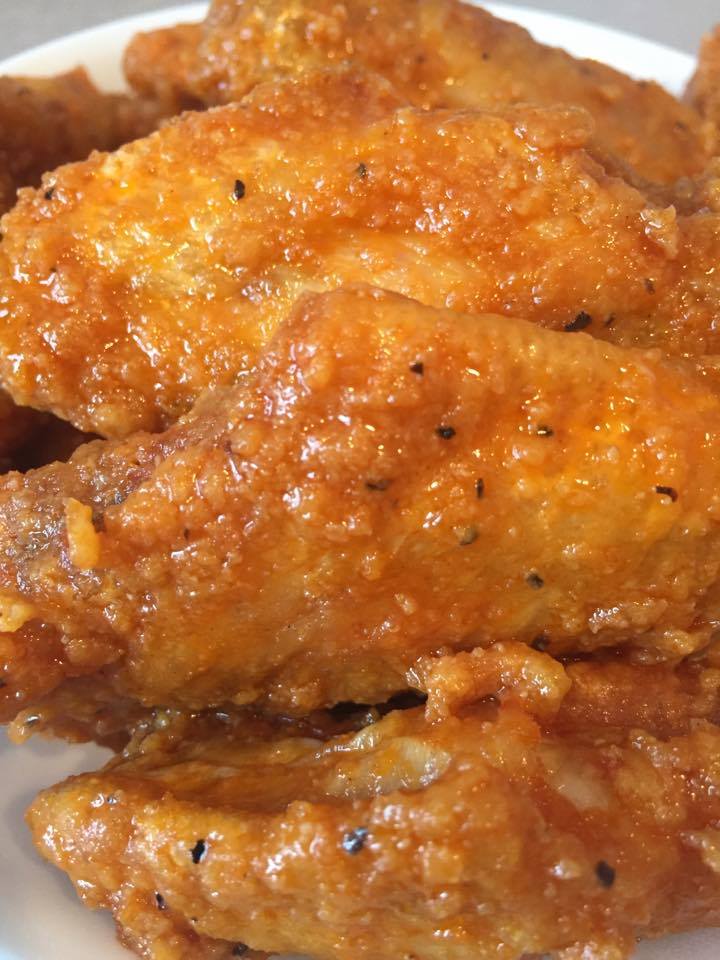 These turned out… amazing, and I kept finding myself reaching for this bowl instead of for the gochujang wings. That’s when I realized a crucial factor that I missed, gochujang is a base, and although We Rub You’s is a great one, its balance results in a really good wing that doesn’t have any “pop”. Frank’s Red Hot isn’t balanced at all, it comes in strong with the vinegar and spice which gives you the kick in the butt that you want when eating something rich and fatty like chicken wings. The balance in this sauce is its greatest strength, if it went too heavy on one flavor component it wouldn’t be as versatile. I started throwing this gochujang into everything I could think of: Gochujang + BBQ Sauce? Check. Gochujang + honey, tomatoes, onions, and garlic? Check. I would start by replacing your go to gochujang with this one, but after that the possibilities are endless.

For the most part, there weren’t any huge revelations coming out of our messing around. We already knew that We Rub You is a top quality brand and we really just confirmed that their Original and Spicy are top notch when it comes to making an authentic Korean dish in the home. What did surprise me though, was the Gochujang. There really isn’t all that much variety in the commercial gochujang’s available, I didn’t even really think there could be much variety. It’s almost so ubiquitous and prevalent that it’s like salt… salt is salt… other than the shape I don’t care all that much who it’s from. But We Rub You opened my eyes in terms of the essential nature of gochujang in Korean cooking and how if you really want to achieve excellence in a dish you need to demand excellence in every component, no matter how small or innocuous it may seem. It’s almost like a hammer, majority of the time any hammer is good enough to deal with your standard nail, but if you can spring for a great quality hammer that you can be confident in, you can face any potential situation with that same level of confidence.

Gochujang really should be as prevalent of a condiment as Sriracha and We Rub You is definitely doing their part in representing and putting forward a product that we can all be proud to stand behind and introduce to our friends.