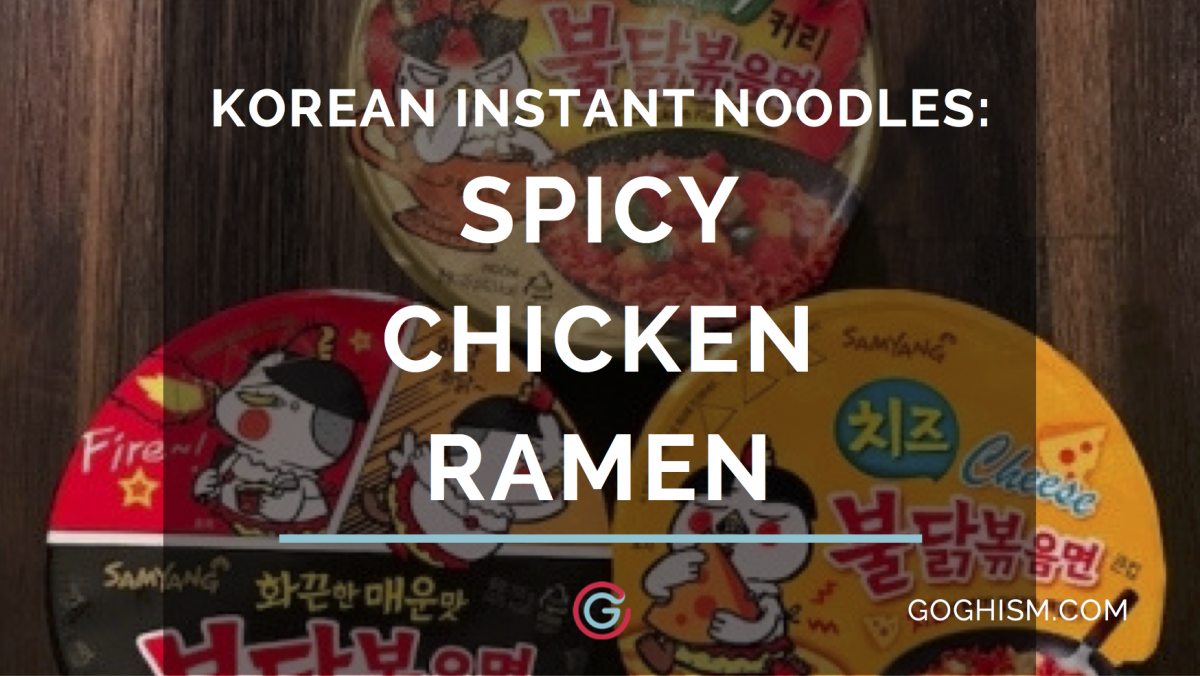 After 8 hours of researching, testing, and repeatedly setting my stomach on fire, Samyang Curry Buldak Bokkeum Myeon is the best spicy chicken instant ramen you can buy today. All of the varieties of spicy chicken instant ramen we tested got me sweating nearly instantaneously, but the curry works nicely with the spice to give it a multi-toned flavor that isn’t simply overwhelming you with heat. 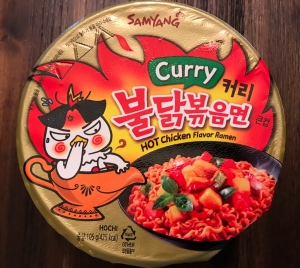 I was honestly surprised this came out on top. Usually I stick with simpler flavors and shy away from the gimmicky. However, the curry mellowing out some of the spiciness made this slightly more enjoyable to eat. However, do note that it is still really spicy!

The curry tasted similar to the Japanese golden curry sauce mix and melded together seamlessly so that I was able to get a nice balance of curry and spice flavor with each bite. In addition, this pack came with an extra side of vegetables, which made me feel great that I was eating healthy for once… I don’t think this is for everyone, but for curry and spicy instant ramen noodle fans out there, this is a marriage we’ve all been waiting for! 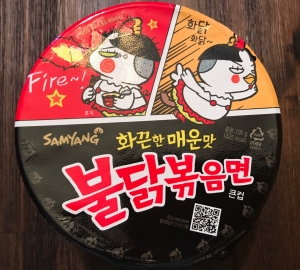 Easily the spiciest out of the three, I started sweating a few bites in, but I kept going back for more. It comes with one sauce packet that coats the noodles in a dark, red, glaze. Your body will know immediately how spicy it’s going to be at first glance.

Just like the picture on the packet, a wave of heat will rush over you as soon as this hits your lips. However, after the initial barrage, a pleasant sweetness and tanginess comes through. Be warned, you won’t get an explosion of flavor in your mouth. The original buldak bokkeum myun was meant to be hot. If this isn’t enough spice for you, try out the 2x spicy version. 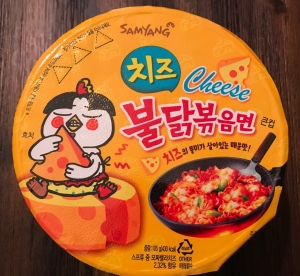 Now before judging why anyone would want to put cheese inside spicy chicken ramen, cheese has actually been really popular in Korean dishes such as jjigaes (stews), rice bowls, pork ribs, and pretty much anything else your heart desires. This version of buldak bokkuem myeon came with two packets, instead of one, with the other packet being powdered cheese.

The cheese was definitely not overpowering, much subtler than I thought it would be. You can taste cheese with each bite, but unlike the curry flavored, the spice is still very much the dominant note, which is probably intentional. I know that this is spicy instant ramen noodles, but I probably would have preferred to have an actual slice of cheese melted and stirred into the noodles, giving a more gooey texture.

Despite it being my least favorite of the three I would definitely eat this again, and it should peak the curiosity of all cheese lovers out there. Plus, how can you resist not trying it out when you have a picture of an awesome looking chicken sitting on top of a wheel of cheese serenading or just loving the heck out of a slice?

Korean food is known for that signature spicy kick of gochujang and gochugaru, and Korea’s take on instant noodles doesn’t stray far from the tree. I have yet to see a Korean grocery store that isn’t stock full of towers of spicy noodle packages. You can’t even trust the ‘mild’ versions if you’re on the spice averse side.

Several years ago I stumbled upon buldak bokkeum myeon (불닭볶음면), which literally translates to ‘fire chicken stir fry noodles’, and it’s definitely a game changer in the spicy instant noodle world. Buldak bokkeum myeon is advertised as ramen but doesn’t have any broth. Instead, after boiling the noodles you drain out all the water and stir in the seasoning sauce (similar to a well known friend of mine Chapagetti). No clue why they decided to go with spicy instant chicken ramen, but I’ll just go with the flow so I don’t have to keep on typing out buldak bokkeum myeon.

Given its extreme level of spiciness it’s not really surprising that spicy instant chicken ramen got a challenge all of its own a la the Cinnamon Challenge dubbed the “fire noodle challenge” (불닭볶음면 도전).

The challenge is to down the entire bowl of noodles without a drink. In 2017 Samyang upped their game and dropped the hek buldak bokkeum myeon (hek = nuclear), which doubles the spice level (8,706 SHU) as opposed to the ‘weaker’ original (4,404 SHU). Any time you go ‘nuclear’ to describe a dish it only means trouble for the next morning. Naturally, of course, the even more mouth firing “nuclear fire noodle challenge” became a thing. I thought I was ok with spice, but let me tell you, this makes me sweat more than a Korean sauna. The spice is tantalizing and addicting, but incredibly painful at the same time. Even my mom, who I’m 99.9% certain doesn’t have any taste buds, gave it her seal of approval.

Which reminds me, Jinwoo and Shin, I challenge you to the nuclear fire noodle challenge!

Since Buldak Bokkeum Myeon’s development in 2012, Samyang has created six other varieties that differ in taste but solidified their spicy trademark. We’ve pit three: the original, curry, and cheese to see which one of these red headed step children stand out. We’ll be basing this on: spice level, balance of flavors, complexity of flavors, and the overall texture of the sauce and noodles. I cooked each pack per instruction, nothing was excluded, and no outside ingredients were added. The noodles were all eaten 20 minutes after cooking was completed.

In the same vein as our Korean BBQ Grill post this flies somewhat in the face of our conventional methodology. As we don’t have the capacity to go out and test all of these rice cookers ourselves we opted to do the next best thing. We applied similar methods as we have for our Best Restaurants posts: relying on the power of the customer base, researching with integrity (we do not have any ties to the companies making these rice cookers), and being self aware enough to know that we are not smart enough to put forward our own opinion. We are simply relaying all of our research in as consumable of a format as we can; hopefully in the near future I can fulfill my lifelong dream of having a hundred rice cookers in my place, all singing their songs of warmth, happiness, and the cooked rice way.

First thing, of course, is to build out the stable of reviewed medium sized rice cookers. We’ll be going down our list as quickly as we can but if you have any rice cookers you are curious about hit us up and let us know. We are continuing our great journey into the hardware side of the culinary world, come along and help us see it through!

It was great seeing how many medium sized rice cookers there are out on the market that do a great job of what they’re supposed to do… cook rice. But like any piece of hardware durability seems to be a consistent and major issue for these babies. Also, I know we’ve harped on this a bunch in our Korean BBQ Grill post, but these companies really need to come out with some palatable names for their babies. Writing about something that is a jumbled bunch of letters and numbers drives me up the wall. Regardless, it’s reassuring to know that the well being of our rice eating brethren lie in good hands. May your rice be always hot, fluffy, and perfect.

Grew up working as a bus boy, host, waiter, kitchen helper... every job that didn't require me to cook at my parents' restaurant. I understand why they would never trust me to cook let alone play around with knives and a deep fryer. My appreciation for a good meal extends beyond the fragrant smells and tastes, but the company that surrounds you and conversations that you can have without exchanging a single word.
Subscribe
Login
0 Comments
Inline Feedbacks
View all comments
Facebook Instagram Youtube