We’re excited that we can tell West 32 Soju’s story, a company dedicated to their vision of an American soju that upholds the essence of the Korean drinking tradition and culture. With all-natural and gluten-free domestic ingredients resulting in a clean smooth finish without the artificial sweetness, we’ll be watching and cheering them on their journey.

A Look Into Their Journey:

Nothing is more exciting than the present. Well, I’m sure there are plenty more exciting things, but in the present, we have the ability build upon the past and shape the way for the future. This concept can apply to anything – from Hyper Loops to what’s for dinner. The development of West 32 Soju is no different. When founders Maxwell Fine and Daniel Lee reached out to us, I didn’t know what to expect since I had never heard of any soju being made in the US. Even my mom, a restaurant owner and avid soju fan, was shocked at the prospect of a US distilled soju because it wouldn’t be “original.” Yet, once I heard their story I was definitely intrigued and impressed by their passion and unique approach to soju’s evolution in a way that blends their taste and the trends of today.

The seed for West 32 Soju was planted and cultivated in the NYC block where Max and Dan spent countless nights drinking soju with friends. Their vision is to share that social experience with an all-natural, neutral tasting soju. It’s still too early to say whether David can bring down Goliath, but if craft beers have shown us anything it’s that there’s always room for some variety. Regardless, I’m excited to watch and cheer as they strive to make soju an indelible part of America’s drinking culture. The idea of West 32 Soju started out like how many great ideas begin… with bottles of liquor and good company. After becoming friends in college and moving to New York City, Max and Dan were regular fixtures in the K-town scene, filling up on mouth-watering dishes and having countless soju-filled nights. However, during a typical night out a few years ago, they realized that the same questions kept popping up… from “why is soju so sweet?” to “damn, how bad will my hangover will be tomorrow?” and then for the first time, “what can we do about it?” What started as a spur of the moment idea became a passion that sparked the beginning of Max and Dan’s journey.

Coming up with the idea was the “easy” part. Following through with it on the other hand, especially in a top heavy industry dominated by Jinro, Lotte, and the like, took some serious conviction. Max and Dan, however, weren’t phased by the competition because they were taking part in an endeavor that they truly enjoyed. I was impressed by their dedication and the depth of their research around the nature and process of the soju distillation industry (ask them how many artificial ingredients most soju companies use). I haven’t verified their findings but the artificial, chemical-like, sweetness they refer to is definitely present in almost all of the sojus I’ve tried.

West 32 Soju is “a different sprit, an all-natural, better-tasting, superior soju.” Armed with their research and a vision Max and Dan built their soju’s identity on domestically grown, gluten-free all-natural ingredients. They use cane sugar as a light sweetener and corn for the base foundation through their triple-filtering process, striving for a more neutral, less artificial taste. They emphasized the importance of using domestically grown ingredients, to give their soju an American twist. To give their brand even more of a distinction, they decided to do away with the twist off cap and instead replaced the cap with a cork in order to better preserve freshness after use. Although it slightly makes me sad that I won’t be able to “flick the cap”, it’s bold and refreshing to know the level of thought and care that went into every detail, even something as forgetful as the cap. Plus, I’m eager to see if the soju drinking public can come up with some cork based drinking games.

In light of the similarities and differences, Max and Dan stressed the importance of wanting to preserve the essence of soju when developing their brand — a drink that “continue[s] the time-honored Korean ritual of celebrating life” and one that can be shared amongst family, friends, or even a group of strangers. They wanted to capture their memorable nights in NYC hanging out and building friendship and share that experience with others through their soju.

After over two years of research and tests, West 32 Soju officially launched in December 2016. I had the chance to try out West 32 Soju and can personally say that they did deliver on their promise to create a refreshing and more neutral soju. You can read more about my review on West 32 Soju in our previous post. Currently, West 32 Soju is available in three states as well as online and is kicking ass in local liquor tasting competitions. They are currently focused on expanding to other locations in the US so be on the look out at your nearest karaoke bar or restaurant! It’s fascinating to see the origins of what could become a powerhouse in the food industry and see what shaped their journey so far. It makes me happy to see and meet people that want to spread awareness of Korean culture in the US. Jinwoo said it best in one of his previous posts, “one of the benefits of being second generation anything is that you get to stand on what the first generation built when they came to the US. It’s exciting to see that in Korean food today as we move away from the comfort of our traditions and start wondering how we can leave our own mark on them.”

Max and Dan never made soju before starting West 32 Soju, but through their passion, they found an avenue to channel it with others. What’s pretty cool about West 32 Soju goes beyond the product itself, but the friendship that continues to strengthen and evolve through their common drive and vision. Listening to their story really resonated with me here at Goghism because we get to share our passion and most importantly gives us an excuse to talk to each other all the time (right Shin and Jinwoo?). 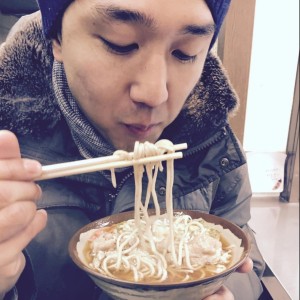 Grew up working as a bus boy, host, waiter, kitchen helper... every job that didn't require me to cook at my parents' restaurant. I understand why they would never trust me to cook let alone play around with knives and a deep fryer. My appreciation for a good meal extends beyond the fragrant smells and tastes, but the company that surrounds you and conversations that you can have without exchanging a single word.
Facebook
Instagram
Youtube